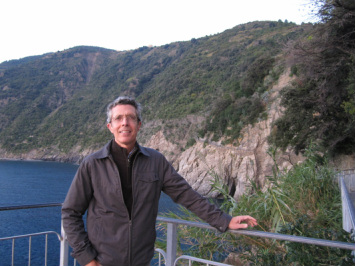 At a very early age, Stanley Truffini knew what he wanted in life, and he followed his path with unsurpassed vigor and dedication. His  two passions, art and veterinary medicine, have lead him on an incredible, sometimes intermingled journey that has now spanned well over 50 years. His paintings have been on multiple covers of the Journal of the American Veterinary Association over the span of 3 decades, as well as numerous recognitions by committees and peers alike. He has won first prize in watercolor at the Richter Art Association in Connecticut.

Born in NYC in 1952, Stanley was already painting with his father,  impressionist Guido Truffini, at the age of 8 years old. They would go to Central Park together where they would paint the ducks on the reservoir, and do scenes of the park.  Guido was a long standing member of the Art Students League (ASL) thru the 1950’s and 1960’s and inspired Stanley at a very early age to pick up a brush. It was also at this time, according to his mother, that Stanley felt his professional calling to veterinary medicine. There was no other profession for him, and he followed this dream to the top of his class at Cornell University, where he was awarded the Charles Gross Bondy Award for excellence in Clinical medicine.  Stanley is considered “the best of the best” by his peers in the Veterinary profession. Through all of the long hours, and dedication to his veterinary calling, Stanley never waivered from his art. It is that same spirit of dedication, and striving to be the best, that he brings to his body of work. With his beginnings rooted in watercolor, there are few artists in the world that have mastered the delicacy and intricacies of watercolor such as Truffini. Thru plein air artist retreats with masters like Stanley (SW) Crane, and alongside his father, he reached new heights with his watercolors over 5 decades. Like any true artist, he then looked at what was “next”.  His father had dedicated 90% of his studio time to oil.  Stanley had done numerous oils during his youth, and has allowed this talent to resurface. While still making watercolors, he is also producing beautiful oil paintings. He has painted all over the world but his love of Nantucket and New England has driven his passion for both landscape and still life work, which remain at the core of his inspiration. Because of his reputation with many of his professional medical clients, he is also  frequently approached by enduring admirers for commission work of their beloved pets. As a world famous illustrator once told Stanley, the difference between what he does and what Stanley does is that Stanley can do what he does, but he could never do what Stanley does…

Stanley's art is inspired by what nature provides.  He attempts to interpret it in a way that brings visual pleasure to those who see it.  He likes to give life to a subject by using it's inherent colors and movement thereby creating another viewing dimension.  His style is a mix of both plein air and studio, but if you asked him what accomplishment he is most proud of, his answer would simply be ‘My Family’. Together and married to his loving wife and childhood sweetheart Carol since 1975, they have two sons, Daniel and Christopher, and two grandchildren, Anna and Aidan, and spend their time between Connecticut and Nantucket, where both originals and prints (giclees) of his work can be seen and purchased at a select group of galleries, as well as directly from the studio @ 203 938 6938.
He is currently represented by the Robert Foster Fine Art Gallery, the Artist's Association of Nantucket, and the Nantucket Looms.